The complex system of lymph production, transport, concentration and filtration, disorders can develop which have serious consequences. The most prevalent of these disorders is lymphedema.

Lymphedema is a chronic disease with a tendency to progression. It can affect all parts of the body, but most often the limbs are affected. If left untreated, lymphedema can become disabling and at the very worst undergo sarcomatous degeneration. Lymphedema occurs most often in the limbs.

Primary lymphedema is usually due to a birth defect, such as hyperplasia or hypoplasia of the lymph capillaries or lymph vessels.

Lymphedema can have a primary cause such as congenital defect, or secondary causes such as acquired damage or disease of the originally intact lymphatic system.

The causes of secondary lymphedema are an acquired obstruction or destruction of efferent lymphatic vessels, due for example to cancer treatment or severe injury.

Lymphovascular lymphedema can also be of primary or secondary origin. Primary limb lymphedema usually begins distally and spreads in proximal direction. It can be present at birth or develop later on during the patient’s lifetime. When left untreated, it can sometimes assume gigantic proportions.

Secondary lymphedema is often the result of a cancer operation. But lymph vessels can also be injured or destroyed by other surgical interventions.

Extensive scarring, e.g. after a severe burn, can also cause lymphedema.

Extensive scar formation after severe injury can also cause lymphedema. Distal to the drainage obstruction caused by the injury, the lymph stasis extends into the lymph capillaries. Lymph production is also affected.

Malignant tumors are another cause of secondary lymphedema.

Malignant tumors infiltrating into the lymph system or compressing the lymph vessel can also cause lymphedema. 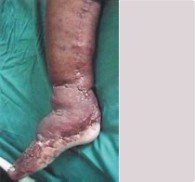 A disease endemic in tropical regions, where it is transmitted by mosquito bites, is lymphedema caused by parasitic threadworms (filaria).

Filaria that penetrate into and damage the lymph vessels cause a special form of secondary lymphedema. Filariasis is a widespread disease in the tropical regions, where the threadworms are transmitted by mosquito bites.